Be Careful What You Eat

I was going to put up a music video with the Smiths or the Pixies, something dark and cool. However, I can’t do the tall, cool drink of water thing this week because I’ve been eating way too many white chocolate and butterscotch cookies. Screw Team Pie and Team Cake, I’m Team Cookie all the way. *throws gang signs*  Anyhow, since I can’t be a cool example, I figured I could be a horrible warning….with the help of one of my favorite songs from Animaniacs.

Go ahead and sing along.  You know you want to.

Happy Birthday to Me, I Live in a Tree….

And I have no idea how to end that rhyme because it’s been exactly 30 years since second grade. Yeah, you can go ahead and do the math.

This isn’t really a post, I just wanted to brag. Oldest gave me breakfast in bed and cleaned the kitchen, almost making up for getting a bad grade in math today. Almost. Middlest made me a card in which he hoped I got to do what I liked best, reading and making clothes. The kid knows me well. Youngest gave me a very sticky kiss and a no-whine morning. Also? I’m still breathing and nothing hurts. AWESOMESAUCE.

And by the Academy, I mean Misty of Misty’s Laws who bestowed this award on me:

The rules are as follows:

1.  Compose a short dedication to the person who gave you the award.

2. Write a list for your readers, detailing things about yourself that your readers don’t know.

3. Pass the love forward to five bloggers that you feel deserve to receive it too.

So, here goes! Misty is the funniest lawyer I’ve ever known. I used to work for a law firm and I’m related to lawyers, not a whole lotta laughs there. But between the bad style highlights, the “your car makes you look like a douche” snapshots, the adventures in Ren Fairing and the running commentary from her adorable son, she gets a giggle snort out of me every morning. In fact, Misty is better than coffee, and I’m including Starbucks holiday drinks in that so you know I mean business. Go read her.

Things you don’t know about me? Well, I’m not much for hiding my light under a bushel so it was hard to come up with something that nobody knows but:

1) I have so many allergies, it’s embarrassing. Thank God most of them hit after having kids or I would have spent my dating years ordering food like Meg Ryan in When Harry Met Sally. “I’ll have everything on the side, kthanxbai.”

2) I’ve read the complete works of the Marquis De Sade. Don’t bother, by the way. De Sade was a hack who would get himself shut up in debtor’s prison, publish something to pay the bills, then go off drinking and carousing and wind up back in prison… His stuff was like the Penthouse Letters of its day. I always picture a bunch of guys reading it while standing around in frock coats going, “This sort of thing never happens to me.” The only De Sade work of any literary merit is Justine, and it’s only worth reading if you’ve read Samuel Richardson’s Pamela because it’s a rebuttal to that.

4) I had an eating disorder in college. I have no idea what size/shape my body is, even when I look in the mirror. This causes some problems in sewing because I have a bad habit of making things too large.

5) I used to play Magic the Gathering, but gave it up (and gave away my cards) when I moved because I didn’t know anyone who played other than my former roommates.  I still kind of regret that.

6) I learned to sew as a kid by making Cabbage Patch clothes. I have the original patterns I used (though I no longer have the dolls). I still like Cabbage Patch kids, especially the way they smell fresh out of the box. In fact, I’m tempted to go buy one now.

7) Speaking of strange smells, I also love the smell of Play-doh.

Now for my honorees:

Seraphinalina is an absolute sweetheart. In fact, she’s one of the nicest people I know online. Her blog covers everything from sewing to family to infertility to her connections to the folk music scene. I’ve discovered some great musical artists through her and she’s always an education to read.

Tanit-Isis has amazing sewing skills. She’s constantly whipping up jeans and crinolines and Baby Doll costumes. She blithely carries on sewing through successes and disasters alike, turning out clothes for herself, her husband and her two girls Tyo and Syo at breakneck speed. I only wish I had the balls to take half as many risks.

Team Suzanne writes a blog ostensibly about homeschooling her two kids, but really, it’s just an opportunity for her to comment on global warming, aggressive animals and stupid people. If you ever wanted to know how to mummify a chicken, she’s your gal. If you wanted to know what a mummified chicken smells like afterwards, still your gal.

CorpGoth highlights goth couture as worn to the office. Her outfits are adorable, and she knows more about strategic accessorizing with studded belts and bats than anyone you’re likely to meet. She also sews historical costumes at Trystan’s Costume Closet. I want to steal almost all of her shoes.

Now go forth and be awesome!

Really, I’ve been scratching all day. Wish I could show you a finished garment for my trouble, but sadly the one thing I DIDN’T accomplish was sewing. I did, however, clean out the refrigerator: 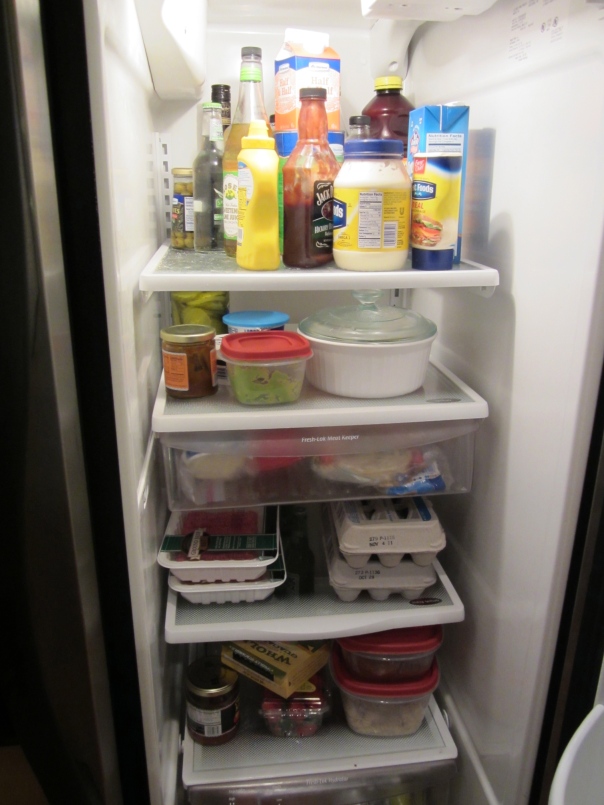 Ta-da! You can identify the food!

After which, I texted the Hubs that he owed me hazard pay. We had chili in there from last month.

I also cleaned out the garage. You’re just going to have to take my word for it:

I promise, this is an improvement. It was worse before.

Then I cut out and prepped a skirt:

Unfortunately, I don’t know when I’ll be able to get around to that since the Hubs is leaving town again this week. In preparation for his demise — oops, I mean departure — I also finished an arseload of laundry:

It's clean, just not put away. I'm not a miracle worker.

At this point, June Cleaver would be sitting back with a gin and tonic and the knowledge of a job well done.

I’m not June Cleaver, and I WANT MY FRICKIN’ MEDAL. A scantily dressed hunk with a cleaning compulsion wouldn’t be a bad idea either. My birthday’s coming up, after all.

Only Happy When It Rains

It’s raining, it’s pouring….I don’t know why this delights me so much, as I never accomplish anything in the rain.  Rain is for eating junk food in front of the TV, or snuggling up with a good book.  Maybe that’s the point — I don’t feel like I HAVE to achieve anything when the weather isn’t cooperating.  Yay, rain.

As of this week, I’ve started running again.

This has made a lot of people very angry and been widely regarded as a bad move. No, wait. That’s the creation of the universe as explained by Douglas Adams. Frankly, me running could also be regarded as a bad move. I have shin splints, knock knees and a tilted pelvis. My feet are prone to stress fractures. Somewhere out there is a running manual with a drawing of my anatomy and a note saying, “DO NOT DO THIS.”

I keep coming back to running, though, for a few reasons:

1) It’s the only exercise I’ve found that actually engages all of my leg muscles. I’ve tried biking, stair master, elliptical trainer, and I was a swimmer for years. Ten minutes of running beats 45 minutes of anything else. Every time I start running again, no matter how good of shape I may be in, I can feel it in my muscles.

2) It’s the only exercise that doesn’t bore the everlovin’ sh*t outta me. Put me on a machine for more than five minutes, and I’m desperately begging magazines off innocent bystanders or trying to read someone else’s Kindle from the side (note that this is not actually possible, but it doesn’t stop me from trying). Running — even on a treadmill — feels liberating.

3) If the zombie apocalypse comes sooner rather than later, I’m going to feel really silly for being too slow to outrun a zombie.

So, I’m back to running….slowly. Building up my endurance and trying not to completely wreck myself in the process. All of which means, this week, I’m walking kind of funny. Parts of my lower half are very unhappy with me. If you remember the old Animaniacs cartoons, they had an ongoing joke where someone would say, “Walk this way,” and Yakko, Wakko and Dot would promptly follow them while mimicking their walk exactly. I spent a lot of time on Youtube trying to find a clip of that, with no success. I did find THIS:

I may be walking funny, but I’ve got nothing on Monty Python.

I finally finished my camouflage skirt today! I just had to sew on the belt loops and the hook and eyes for the waistband. Here is the pattern: 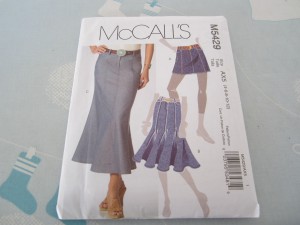 McCall 5429, now out of print. I made View B, the mid-length but without the godets.

By the way, the only problem I have with this pattern is that the waistband overlap is so small, you HAVE to do pants hooks because there is no room for a button. I really prefer buttons with a fly front. Oh well, I just lined up two pants hooks vertically to make a secure closure.

I also left the godets off  because the fabric is kind of stiff and I wanted a more subtle trumpet effect. Unfortunately, the length of the skirt is 25″ which is usually considered pretty dowdy and even taking up a slightly deeper hem only made it 24.5″ on me.

I don’t think it’s the most flattering skirt I own, but it’s infinitely better than the short version would have been at 16″ which is a full inch shorter than I prefer my miniskirts. I cut and sewed a straight size 12, and aside from being a teeny bit tight in the upper thigh area (a perennial fitting problem for me), it fits fine. I did sew the waistband with 3/8″ seams rather than 5/8″ but I do that a lot because I prefer wider waistbands like those found on RTW.

Anyhow, I’m glad this is done because this will be a good skirt for the fall weather that we are expecting later this week — rain and temps below 60. Yay!  I love rain.