← Greetings from the City of Love!
Summer Playlist — Get Tattooed →

My God, I Need Sleep

I’m back from San Fran with one night of sleep in my own bed under my belt. You would think that would be enough. You would be wrong — I now need a nap to recover from my vacation. It would probably help if Lila didn’t insist on rubbing her cat love-drool on me at 4:30 am but it’s such a part of home, I didn’t mind too terribly. Here, while I doze off, I’ll show you a few pics of the spoils of war:

Kera, Fudge and Female magazines from Japantown’s bookstore. Kera showcases punk, goth and Lolita fashion with a section of street style snaps. Fudge is basically high fashion as done by your very chic, preppy teenage neighbor. Female is a sewing magazine with patterns included — very basic patterns, but a lot of potential for customization, assuming I can understand the pattern sheet enough to trace them out.

I would totally wear these clothes.  I’m not sure what that says about me, other than I have no style and I’m stuck at age five.

Fudge is probably closer to what I’d wear assuming I had any fashion sense whatsoever. I already have the dark short-shorts, just need a striped tee to pair with them. Also, I’m in love with this skirt:

I need to figure out how to knock off this skirt. 'Tis awesome.

I bought Female mainly for the sailor collar blouse on the left: 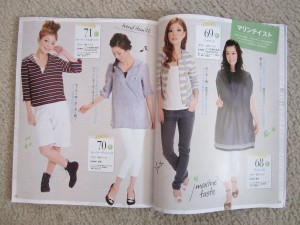 I also picked up 2 yards of this awesome fabric from Mendel’s in the Haight.  I’ve seen this print before but not in the black/white/pink/gray colorway: 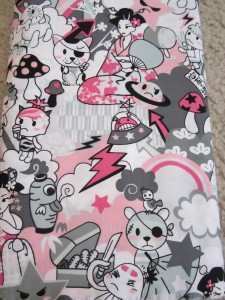 Then I got these steampunk buttons, also from Mendel’s.  I only bought 2 of each because I don’t really know what I’ll do with them.

From Cheap Thrills in the Haight, I picked up a bunch of patches:

I’m gonna slap these on anything that holds still long enough.  I know, they’re so cliche but who cares?

I forgot the best part of the whole trip….getting to see friends we don’t see nearly often enough. 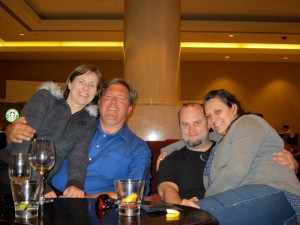 Yay for hanging with my peeps!

Posted on July 28, 2011, in my weird sense of humor, Uncategorized. Bookmark the permalink. 6 Comments.

← Greetings from the City of Love!
Summer Playlist — Get Tattooed →